The past 12 months have made up the worst year in traditional TV’s history. Advertisers need to be wary of TV as a primary marketing channel, and may need to invest in other marketing channels to reach younger crowds. 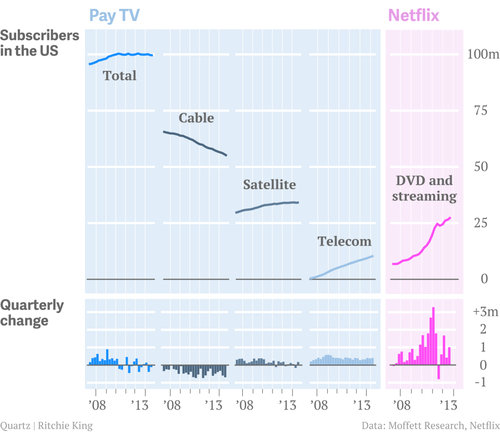 If you’re a young person in America, the likelihood that you’ll ever sign up (or continue paying) for a traditional TV subscription, such as Cable, is at an all-time low since TV blew up as a staple in American culture. The total number of cable subscriptions continue to free fall off the charts, and satellite and telecom service providers can’t attract new customers fast enough to counter Cable’s fall. It looks like the trends will only get stronger over time, but your TV shows aren’t in peril.

Netflix, Hulu, Amazon and iTunes will take care of your shows (and even produce new shows and/or episodes) as TV producers, directors, writers and actors take to the Web as a primary, first-rate broadcasting channel. Actually, it’s the TV networks that have a lot to worry about. Their cash cow, the TV commercial, is losing value fast, and other marketing channels are eating up all the left-over profit.

Furthermore, mainstream social networks tout massive audiences that dwarf those of even the biggest TV networks, and it’s easier than ever to accurately target your audience on these networks, ensuring that you don’t pay for irrelevant impressions or clicks. Topical blog sites also do a great job of attracting smaller niche audiences of the Web, and many of those sites employ creative advertising teams that partner with businesses to build and serve relevant ads to their audiences.

Ditching Traditional TV in My 20s

In my own experience of 27 years on this planet, I ditched cable on my way to college. I was an avid TV fan growing up in my parents’ home with Battlestar Galactica, Buffy the Vampire Slayer, Lost, The X-Files and much more. Sadly, I would often construct my daily schedule around my favorite shows and not the other way around. Clearly, that’s not how life should be. TV should adjust to my schedule.

As a college student with robust university-grade Wi-Fi, I discovered a beautiful truth. The Web and a-la-carte methods, such as Netflix DVD subscriptions, are more liberating and satisfying ways of watching TV. The best part is that it costs much less than cable or satellite.

No, scratch that. The best part is I’m no longer forced to sit through long stretches of ads in between cliffhangers of my favorite shows.

Don’t get me wrong. I don’t mind the occasional commercial as long as it’s relevant to me, but I can’t stand a long stream of irrelevant commercials every seven to ten minutes. Neither can my peers.

For example, if I was ever in the mood for Saturday morning cartoons during a weekend study session, Cable would force me to sit through tons of relentless ads for too-sugary cereals, poorly-designed action figures, and make-your-own jewelry kits. As a 19-year-old male, these ads would be wasted on me, but no matter what I watch on the Web, the shows either come ad free or only slightly interrupted with very relevant ads.

As a result, TV’s fatal flaw is that it can’t segments audiences very well, and TV networks are way too greedy, steadily and stealthily increasing total ad-broadcasting time throughout the history of TV. Marketers, be careful of your strategy on TV; depending on your audience, the marketing channel could turn into a huge waste of money for your business. If your goal is to reach folks under 40, your best bet is probably not TV.