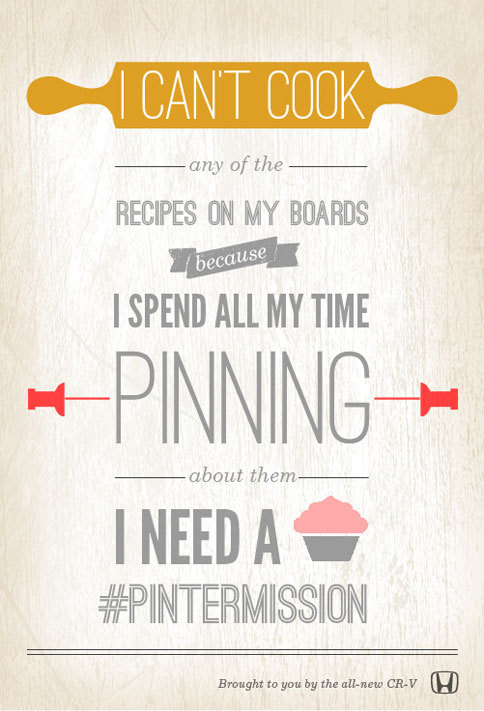 Every Monday, we analyze a successful marketing campaign, or we assemble a set of tips on a relevant marketing topic to help you boost your business to the next level. This week, we dissect Honda’s very successful #Pintermission campaign.

Social-media marketing is a tricky landscape to navigate, but some out-of-the-box creativity can go a long way. Big brands know this well, and Honda knows this better than most. In fact, Honda’s #Pintermission campaign reached about five million users, according to Marketing Mag, including 5,000 repins and 2,000 “likes” so far. Overall, Honda measured 16 million impressions when the campaign (which included traditional advertising) was said and done, and that’s not including Facebook and Twitter conversations. But exactly how did Honda leverage Pinterest to such great effect?

The campaign specifically advertised the new CR-V, which encourages the concept of enjoying life beyond the walls of home. The CR-V is also targeted at younger adults that are about to settle down, and these young adults grew up with social media. They are accustomed to making plans online, and a good chunk of this demographic are on Pinterest too. Now, here’s the tricky part. How do you reach all of these people with a minuscule budget?

The name of the game is creativity. If you have it, you can probably be an amazing social-media marketer, and whoever’s working for Honda apparently has it.

Honda reached out to Pinterest users with profiles that have massive follower numbers, and a significant chunk of these followers are individuals from the target demographic. The company offered these users $500 each. All they have to do in return is to make or complete one of their pinned images. Honda calls this concept – taking a day off of Pinterest to give life to a pin – a #Pintermission. 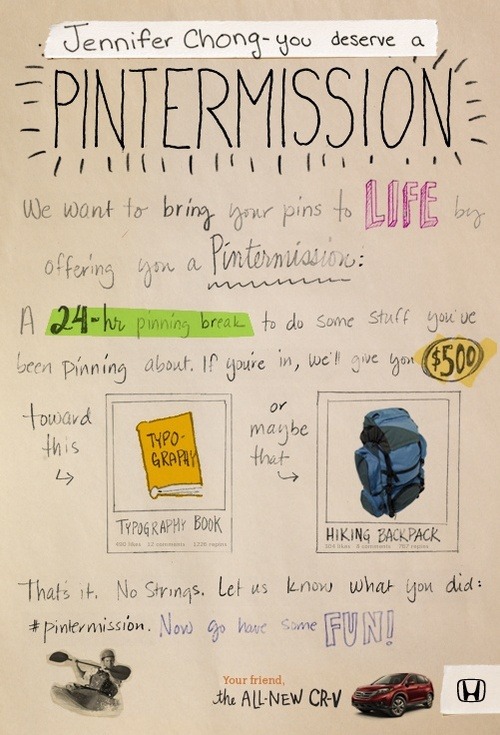 Pinterest is a popular place for sharing how-to articles and images of places or activities that people would love to be a part of, so the rest of the campaign was rather easy. Honda created boards for these users to post their #Pintermission photos, and the company also requested that these users create their own dedicated boards for the campaign (with Honda’s Pinterest profile as a collaborator). In addition, Honda also posted and shared custom images that advertised the concept of a “Pintermission”. With the stage set: online discussions, viral shares and “likes” took off.

Most importantly, Honda understands that Pinterest is not the best place for marketing many of its other vehicles. The CR-V has a unique target audience. As a result, Honda found those users online, and then, it developed a plan to engage those users with the CR-V as the centerpiece for discussion. That’s the big lesson here: find the customers, understand them and engage them.