We introduce a new strategy to flood trade-show floors with fans brandishing your logo. Bonus: get exposure on social media at the same time! 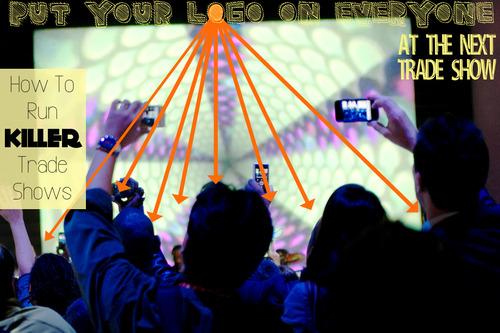 Promotional giveaways are an excellent way to advertise your brand at trade shows, but the vast majority of the time, they are tucked away into bags and backpacks, never to be seen again. Avoid that problem and maximize brand awareness with your limited budget by carefully planning a more strategic giveaway campaign. Today’s tutorial leverages a scavenger hunt and social media to flood trade-show floors with fans that brandish swag with your logo.

We previously covered a very different strategy with a focus on apparel, though it achieves a similar goal. But this new strategy incorporates a variety of promotional items that feature your brand name, so you’re not limited to just apparel. Here’s the plan.

How to Put Your Logo on Everyone

You can get a lot of people to rush around the show floor in your shirts – carrying your bags, using your pens, brandishing your notebooks and other swag –  with a well-planned scavenger hunt that features a few grand prizes for the best players. You will, of course, have to advertise the scavenger hunt ahead of time in your regular marketing channels, including social media; otherwise, nobody will know about it.

In this day and age, you should cleverly add a healthy dose of social media into all of your marketing campaigns, especially your presence at trade shows. In this case, I recommend using social media as the way to record each participant’s collection of the items to be found in the scavenger hunt. It’s best to use your own promotional items, such as pens with your logo, as the items for the scavenger hunt, but you can also throw in some items from sister companies or other companies that you work with.

You should also mix in visually spectacular elements of the trade show show as items to be photographed – such as a celebrity, an impressive booth, a video presentation, a performer, a concert, a keynote address, a work of art, etc. – in order to make the participants feel like it’s not just one giant advertisement for your brand. And the reality is it is one giant advertisement for your brand, but the key is to make it feel like it’s just a fun game for attendees of the trade show.

Most major trade shows occur over several days, so it’s best to break up the scavenger hunt into “rounds”, one round being one day of the show. That allows players to feel like if they don’t do well one day, they still have the opportunity to win the next day. Each round should feature a few grand prizes for the best performers, and there should be one final grand prize for the best performer of all rounds.

Example: Scavenger Hunt for a Fashionable Bag Maker at CES 2014

For this example, let’s pretend that we’re a fashionable bag & case maker for gadgets and laptops, and we’re attending CES (the Consumer Electronics Show) as an exhibitor. Your most relevant social channel is Pinterest, so we require all players to record their collection of items by pinning the items to two boards on Pinterest. The first board is our own company board. The second is the player’s own board, specifically dedicated to the scavenger hunt. That’s is how you’ll verify items for the hunt.

Let’s pretend CES occurs over three days in 2014. The first day, you post the item list on pinterest. The item list is shared and re-shared by fans at the show, and it includes a good mix of hidden promotional items, shoutouts to partner companies, and fun sights and activities that should be experienced by attendees of CES.

Your promotional items should be relevant to your fans, so avoid items that your fans don’t care for, and you’ll have to hide them at different parts of the show, including no more than one or two items at your booth. As a result, you’ll have to pull some strings and favors to get other companies to allow you to use their space for your scavenger hunt. But that shouldn’t be too hard if you’re sending traffic towards their booths. If you ask very nicely and present a good case for why it benefits them, you may be able to use their space to hide some of your stuff; however, if you’re presenting at CES, I’m sure you have at least a few connections, such as partners or suppliers, at the show. Leverage your connections as well.

You should incorporate time-sensitive experiences and items into the hunt, so eager hunters can’t finish the whole thing too fast. The key is to make the hunt last the whole day. Usually, at least a few attendees visit CES as announcers or promoters, so capturing a shot with one of them would be a fun item for the list. Flashy keynote addresses, important video presentations (such as the trailer for a new game), concerts and performances are also great ideas.

Make sure that you throw in at least one or two items or landmarks that aren’t directly on the show floor to get folks visiting the outside area, if it’s worth visiting. CES is held in Las Vegas, so that’s a no brainer. A famous statue, hotel, sign or art piece should be easy to find and photograph, so use a few landmarks as items for your list.

You’ll end each day by posting a new item list for the following day and by announcing the winners, which are the players that found the items first. In order for a player’s list to be evaluated, he or she should visit your booth, and you’ll have an employee review the player’s items. If it is determined that the player won, he or she will take the prize right there and then. Of course, you’ll capture a photo with of the winner and prize, and you’ll post that to your social media channels. The player, of course, must be wearing your promotional shirt and/or bag the whole time. You might also award a larger grand prize to anyone that wins more than one day.

If you play your cards right, the end result should be a ton of people running around the show floor in your promotional shirts and/or other promotional apparel, finding and keeping promotional items that feature your brand or the brand’s of other companies that you’ve partnered with. The sheer spectacle of the hunt will shine a giant spotlight on your brand during the show, attracting the attention of the media, potential customers, skilled professionals that need jobs, and future partners. And, of course, you should receive a lot of social media engagement.