Beer, booths, and bratwurst- what more could you want from an event?

These were my thoughts when I attended Oktoberfest in Downtown Upland.

The event was held just for two days October 7th and 8th, and it was the third Oktoberfest that Downtown Upland has held.

Besides the cultural experience of dance, music, and, of course, beer, it also proved to be a great event to mingle with the locals.

And by mingling with the locals I really mean networking.

It was the perfect event to network at.

The BierBuzz® Oktoberfest, which can be found as a Facebook event, had 614 interested Facebookers and 160 Facebookers who actually went to the two day event.

One very important fact about those 160 people is that a majority of them all live within a 10 mile radius from Downtown Upland. They are locals.

This means a few things:

When I was at Oktoberfest I was speaking with Sam Howland, Founder/CEO of Scoops On Tap. Scoops On Tap makes beer ice cream!

Yes, I said it- beer ice cream! And my goodness it was delicious.

While enjoying my Salted Caramel-Fest, I heard a bit of Sam’s story about how he started and where he is looking to be in a year’s time.

After hearing that story it made me want to support his company even more! It brought a completely different feel than if Walmart were to tell the same story.

We want local companies to succeed! Which makes it even more important to hold local events and get local support from the community.

When you are walking the expo floor of 300+ exhibitors, it’s difficult to stop by every booth.

An event with only 40 vendors makes this task a little bit easier.

I was at Oktoberfest for 1.5 hours and was able to swing by all the booths, at least for a quick look-see and held some great conversations with about 10 of them.

When you are one of the forty booths, you can expect that the majority of people that go will also cross by your path.

It’s getting their attention to come look at your products that brings people in for the sale.

When I first arrived, there was one booth that stood out before all the others, Charlie’s Beer Company.

They had a large, full color table cover, pins, bottle openers, can holders, and flyers all branded with their eye-catching logo.

Not only was it the first booth that I saw, but it was also the most populated booth in the area.

At small events like these where you are one of only forty booths to see, it’s best to make sure you have the products to really pull people in for conversation. And sales!

Many of the vendors that were at this event were small, family owned companies.

Which means they have control over their prices.

According to a Forbes article, small merchants offer discounted items for special occasions – therefore not making this exclusive to big box stores.

Griffin Glass and Jewelry was one of my favorite booths at Oktoberfest.

It wasn’t just their beautiful handcrafted jewelry or their stunning stained glass, but it was their story.

Every single part of their business was family-oriented- Mom, Dad, Daughter-in-law, everyone helped. Even the grandchildren contribute to the business by bringing rocks to polish some of the jewelry pieces.

They were also widely open to creating any type of stained glass I could imagine.

With my odd fascination of sharks, Carla Cadzow was very open in creating one just for me!

And in spite of all the work that it would take her to create my shark stained glass, she offered me a great discount to go with it.

That’s service you won’t get at Amazon or Walmart, that’s for sure!

A Wide Variety of Vendors

Oktoberfest did a great job of not having much of the same type of merchandise. 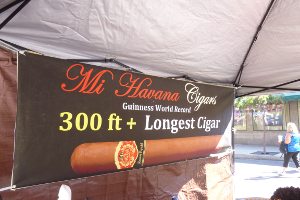 You had quite a few beer and bratwurst booths, which was what you could expect from Oktoberfest, but the variety of merchandise there was great!

This makes for less competition for vendors, and a great event to get all your Christmas shopping done in one go!

While walking around, I walked past one booth, stopped, turned, and had to walk back.

They had the biggest cigar I had ever seen!

The company was called Mi Havana, a local cigar shop that specializes in hand-rolled cigars.

The cigar that I saw, was actually part of a much bigger cigar- one that was 332 feet! A cigar that made the Guinness World Records!

And the man that was there at the booth was Raul Reyner, the roller of the longest cigar in the world!

Together with his wife, Maritza Reyner, and a few others, they made history from a small town called Pomona. A city just down the street from AnyPromo in Ontario!

It was a pleasure to meet Raul and learn more about what they did at Mi Havana. And it was super cool to buy a piece of history!

From cigars to jewelry to beer ice cream, I was able to get most of my Christmas shopping done, indulge in some of the great eateries, and support the local community, all at one event.

While I believe exhibiting at large events is important, I feel that having a booth at these small, local events is even more important.

Word of mouth is strong, and when you are selling products in a close-knit community, word travels fast.

Everyone loves buying from local businesses- it gives them a great feeling that they are contributing to the success of their own community.

You are almost guaranteed foot traffic with having only forty vendors, so make sure you have some great promotional products at your booth to draw people in. It’s a great way to start conversation.

I look forward to attending the next local event being held in the area! If you know of one coming up, make sure to comment the name and dates below.

See you at the next one!

About Megan S 16 Articles
Megan is the Social Media Marketeer at AnyPromo.com and loves traveling and sharks! Her favorite quote is: "Life isn't about waiting for the storm to pass, it's learning to dance in the rain."