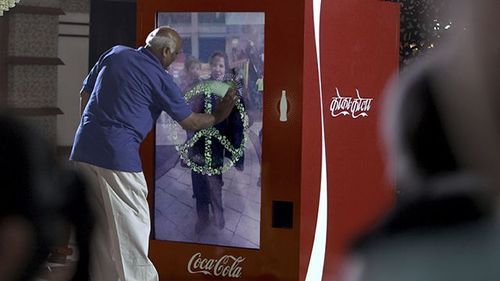 Many brands engage in social welfare as a way to pursue bigger profits, but the reality is the charity ploy often takes a backseat to the profit ploy. In the hopes of reversing that trend, Coca-Cola launched several soda machines that actually have a tangible, instant and witness-able effect on the company’s larger and more charitable goal of world peace.

Coca-Cola’s “Small World” machines are soda machines that feature a Skype-like interface, which enables one machine to launch a video call with a second machine as long as the second machine is located in a country that is currently at war with the country of the first machine. To reward users for initiating a Small World session, it offers both recipients a free can of sweet cola.

The soda company installed the innovative soda machines in some of the busiest parts of India and Pakistan, which are currently locked in a state of brutal war against each other. As a result, a session instantly connects two supposed mortal enemies as they both pursue a good time and a break from the feud.

The concept is rather cute, and I wouldn’t blame you if you cried during the video. More important to the bottom line, the marketing buzz the campaign continues to generate since the machines launched in late May seems to cover the cost of the free soda and the machines themselves. Furthermore, Coca-Cola has an interest in keeping the peace: warring nations don’t often waste precious resources on the luxury of soda. But the same can be said about most other businesses, so I guess we can all profit from some good-ol’-fashioned peace.